ASTRABAT’s technical partners, Elaphe and Lomartov, discuss the development and testing of a new all-solid-state Li-ion cell architecture for the next generation of 2030 Li-ion batteries.

Innovation News Network approached us with interest in learning about the battery advancement of solid-state batteries, developed as part of the European project ASTRABAT and its 14 consortium partners.

The current limitations of Li-ion batteries are limited energy density and safety issues related to fire hazards and poisonous gasses discharge in case of a thermal runaway. The project is altogether responding to these needs and developing a Li-ion battery with a longer life cycle, larger operating temperature range, lower costs, and sufficient energy and power density to power the expected vehicle autonomy of 500km. 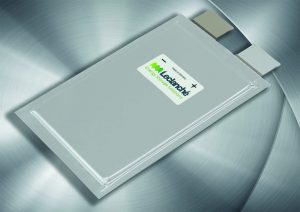 ASTRABAT focuses on bringing all-solid Li-ion batteries to a higher technology readiness level for mass scale usage. To achieve this,  the targets set are battery life cycle of 500 cycles, 10 Ah cell capacity, and energy density of 350 Wh/kg, while the goal is also for the battery to have no flammable electrolyte, no leakage, and no gas formation during cycling.

All-solid-state batteries (ASSB) are inherently safer than conventional Li-ion batteries by replacing liquid and gel electrolytes with solid ones.

Here, the electrolyte will be based on polymers (ORMOCER**® and fluorocarbon polymers) and a highly-conducting additive (LLZO) as promising solid electrolytes due to its electrochemical stability and good ionic conductivity (in range of 0.4 mS/cm).

Generally used graphite is replaced with silicon on the anode side to triple the current energy density. Silicon anodes are also less likely to develop dendrite growth than Li-metal anodes. 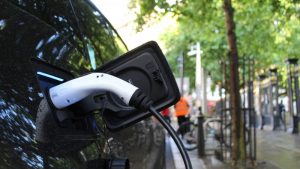 In fact, ASTRABAT is already targeting more than 65% of the recyclability of its materials, the cell is being fully eco-designed considering the environmental footprint of all its components, and safety standards are applied on the ASSB cell ensuring no flammable electrolyte, no leakage, and no gas formation during cycling.

In the ASTRABAT project, Elaphe, who specializes in developing in-wheel motor solutions and performance and environmental testing, is involved in overcharge/over-discharge battery testing on the vehicle, but also in supporting endurance testing and battery performance in extreme conditions.

Elaphe has previous experience on the topic of battery testing and operation of the battery control unit, from its involvement in another European project, called STABLE. Project STABLE was focused on the improvement of the lifetime and cyclability of Li-air batteries.

They were able to develop innovative materials and technologies for Li-air batteries with improved performance in terms of life cycle and specific capacity. The assembled prototypes delivered a capacity as high as 1268 mAh/g and cell performance of over 150 cycles at 100% coulomb efficiency, even overcoming the objectives proposed.

For more about the battery standards and regulations, ASTRABAT’s battery architecture, the advancements on the battery management side, see FULL ARTICLE (link).

ASTRABAT project is funded by the European Union’s Horizon 2020 research and innovation program under grant agreement No 875029.

This website uses cookies to improve your experience while you navigate through the website. Out of these cookies, the cookies that are categorized as necessary are stored on your browser as they are essential for the working of basic functionalities of the website. We also use third-party cookies that help us analyze and understand how you use this website. These cookies will be stored in your browser only with your consent. You also have the option to opt-out of these cookies. But opting out of some of these cookies may have an effect on your browsing experience.
Necessary Immer aktiviert
Necessary cookies are absolutely essential for the website to function properly. This category only includes cookies that ensures basic functionalities and security features of the website. These cookies do not store any personal information.
Non-necessary
Any cookies that may not be particularly necessary for the website to function and is used specifically to collect user personal data via analytics, ads, other embedded contents are termed as non-necessary cookies. It is mandatory to procure user consent prior to running these cookies on your website.
SPEICHERN & AKZEPTIEREN